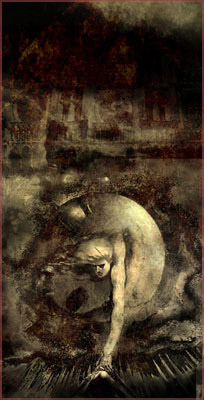 The story I'm about to tell you is about those who we call gods. Listen carefully as this is the true story...

Long ago, in a time before thought, there was only a globe in which all creation was mixed. As there was nothing with which to compare it, the globe was big and small, dark and bright, everything and nothing.

Over a hundred million years, the globe began to grow and eventually two powers slowly began to form within. As they grew, the powers developed consciousness and ego and separated into white light and darkness. White light formed as female and called itself Einhasad. The darkness formed as male and named itself Gran Kain. These two beings marked the beginning of the entire universe, and all that we know today.

Einhasad and Gran Kain pooled their strength to break out of the globe. In this action the globe was shattered into pieces of all kinds. Some pieces rose to become Sky, some fell down to become Ground. Between Sky and Ground there was Water, and some parts of Ground rose up to become Land.

The spirit of the globe was named Ether, also shattered with the breaking of the globe. This brought the various animals and plants into being. "Genesis Creature" was formed of this spirit, and giants were the best of this kind. They were known as the Wise Ones, for their intelligence was as great as their strong bodies. The giants promised to keep faith in Einhasad and Gran Kain, as it was the actions of the two gods that created their life and world. Einhasad and Gran Kain were satisfied with the giants and appointed them to be the masters of all living creatures. This was before death and true paradise existed.

Einhasad and Gran Kain gave birth to many god-children between them. The first five of these children were empowered with the authority of the earth. The eldest daughter, Shilen, was in charge of water. The eldest son, Paagrio, controlled the fire, and the second daughter, Maphr, controlled the land. The second son, Sayha, became master of the wind. For the youngest, Eva, there were no elements remaining, so she created poems and music. While the other gods were busy with their responsibilities, Eva wrote poems and serenaded them with music. And thus the era of the gods began and there existed no place on earth unknown to the gods.