Episode 5: Challenge of the Giants 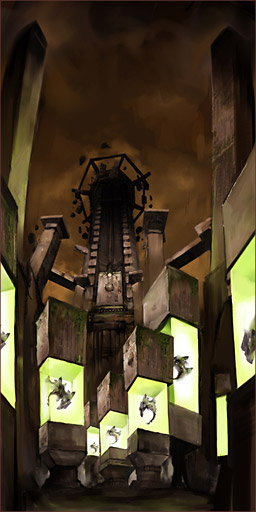 The giants began to harbor skepticism in their hearts. Gran Kain had already proved his own stupidity by making a lowly living creature called human. In addition, due to Gran Kain's lewd conduct and Einhasad's jealousy, The Underworld was created and various demons came into existence. Due to Eva's weakness and incompetence, the continent was badly out of shape. Seeds of doubt began to sprout in the minds of giants. Did such gods deserve their worship?

Giants could ride chariots made with their own hands and freely go in and out of the gods' palace. They could use magic to lift up an island and live in the air like gods. They could prolong their life span until it seemed like they would live forever. The giants began to think that their power was equal to that of the gods. In spite of their wisdom, they became excessively arrogant.

And thus the giants set out to become gods.

They began to experiment by modifying living organisms to create new forms of life. Giants called the magic to make such miracles possible 'science.'

Intoxicated by power, the giants organized a strong army to fight against the gods despite the failure of Shilen, the six dragons, and numerous demons in the same task.

The gods saw the preparations and were enraged. Einhasad, who claimed the sole right to create life, was speechless with fury. She swore to destroy all giants along with the continent and the entire world. Gran Kain pleaded with her to remain calm.

"Much as you are the Mother of Creation," he argued, "so is destruction my responsibility. You know too well what I had to go through when I coveted your task.

I will punish the giants for their arrogant conduct. Yet if you still want to destroy the entire world, I will fight you with everything I have." Gran Kain did not want to allow the destruction of the continent no matter what and Einhasad was greatly offended by Gran Kain's intervention. However, as they were of equal status, she could not stop him.

Einhasad compromised in the end. In order to punish the giants, she decided to borrow Gran Kain's hammer - known as the Hammer of Despair. Due to its great destructive power, even Gran Kain had never used the weapon. Yet in her fury, Einhasad lifted the hammer high above her head and brought it down in the center of the giants' city.